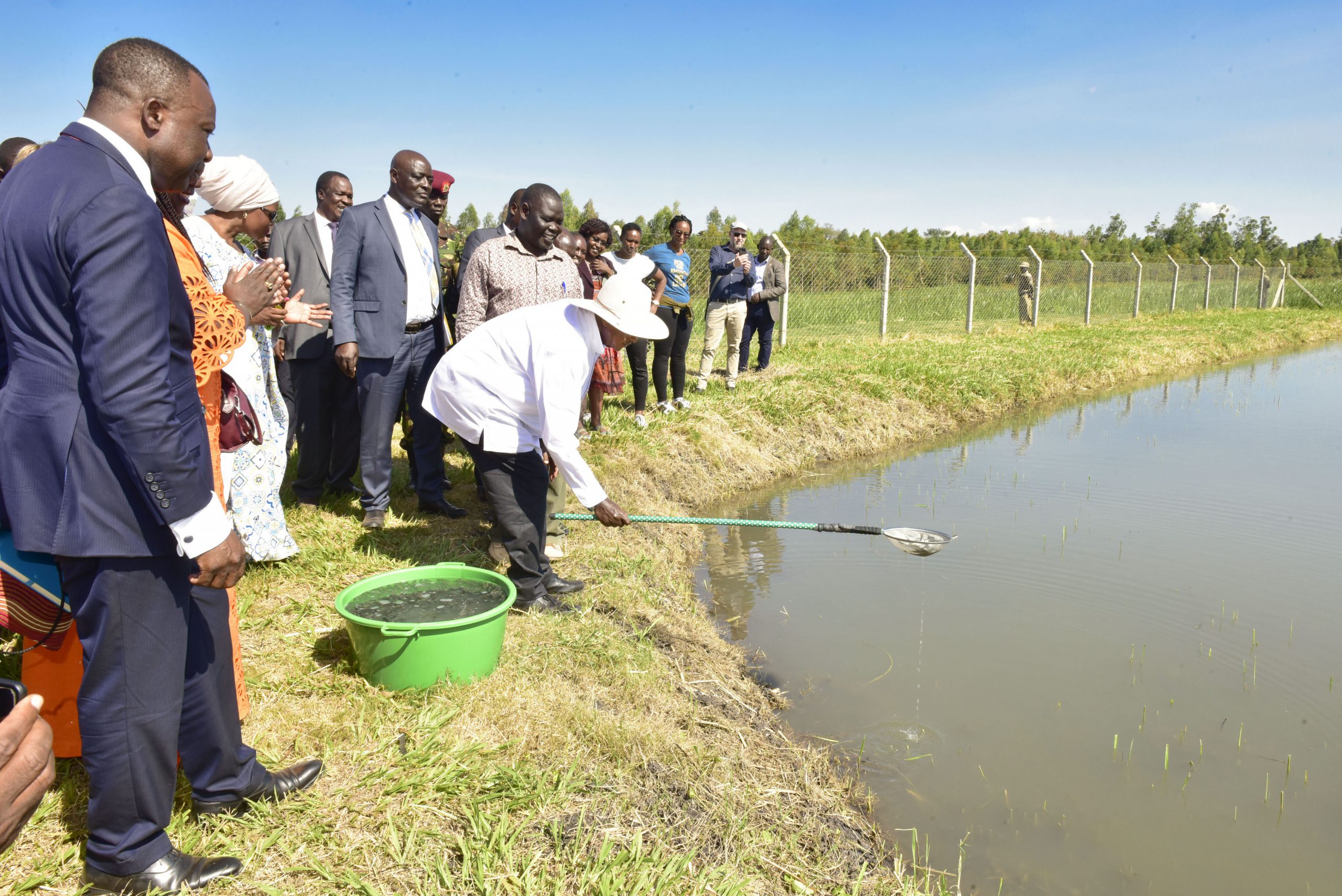 President Yoweri Museveni has toured the first-ever restored wetland project in Limoto Parish of Putiputi Sub-County, Pallisa District in Eastern Uganda that was once destroyed by the people living around the area by growing rice there.

“People who were cultivating the wetland used to get only Shs.700,000/= per year from one acre but now with the fish ponds in the same acre, farmers are getting Shs.70 million per year,” he told a rally at Kalaki Primary School playground.

The President, who was accompanied by envoys of Norway France, Denmark, Kenya, Saharawi Republic, Germany, Tanzania, and the European Union delegation in Uganda, urged the people of the area to emulate the example that has been exhibited at the demonstration site so that they are able to earn more money by utilizing the periphery portions of the wetland for fish farming and other income-generating activities, on the basis and provision of the irrigation scheme.

The Limoto Wetland Wise Use Demonstration Site started 3 years ago following the realization by the Government that people of the area, through growing rice, were destroying the swamp. US$4 million out of the US$24 provided by Green Climate Fund and the Government of Uganda has been expended on the restoration of Limoto swamp.

The aim of the project is to restore and support the target communities in the selected wetland areas of Uganda to reduce the risks of climate change on agricultural-based livelihoods.

A total of 79 kilometers of Limoto wetlands has been restored and 5 fishponds of one thousand square meters each have been excavated and each has a capacity of rearing 6,000 fish, which enables a farmer to fetch between Shs.70 to 80 million per annum.

Over 300 people have been evacuated from the wetland and are to be encouraged to engage in income-generating activities like the cultivation of cabbage, tomatoes, onions, carrots, and watermelon, among other crops, with the help of the irrigation scheme that has been established at the site.

President Museveni urged all the people of the area and those living near wetlands in the country, to emulate what has been done at Limoto Demonstration Site and find alternative sources of income through opening up fishponds.

“You do not only get a lot of money but you will have secured enough water which can be used for irrigation,” he said.

Later, the President reminded the people at Kalaki Primary School playgrounds rally to respect and not abuse God’s great works of creation by not invading swamps that are necessary for rain formation. He added that even the grass in swamps is important for rain formation and mulching.

He told the envoys and wananchi that encroachment on swamps was based on wrong information and poverty. He, therefore, urged all the concerned to use the periphery of the area to fight poverty by engaging in fish farming and irrigation.

Ms. Ellsie Attafuah of the United Nations Development Programme (UNDP) in Uganda, on behalf of the UNDP and the UN family, pledged continued support to Uganda’s efforts in the restoration of wetlands throughout the country.

The Minister of Agriculture, Animal Industry and Fisheries, Hon. Vincent Sempijja said similar projects will be opened up in 24 Districts in the country.

Later, President Museveni took the envoys to Kalyabi swamp, which is currently being destroyed by wananchi who are growing crops there including rice.